As Portuguese as apple tart?

I was surprised to see so many restaurants offering apple tart in Portugal. Somehow I thought this was a Dutch phenomenon, or maybe "as American as apple pie", but the Portuguese seem to have developed a taste for it as well. It's not as popular as their famous "pastel de nata" (cream tarts) of course, but still, apple tart is available almost everywhere.

That doesn't mean it tastes as good everywhere, unfortunately.  I was rather dispointed by the piece of tart I had at "The Beach Basket" in Albufeira. Granted, it was included as part of their 3-course tourist menu, but still, I expected something better. Actually, the whole restaurant fell way below my expectations, but that's another story and I don't want to turn this blog into a restaturant review site. 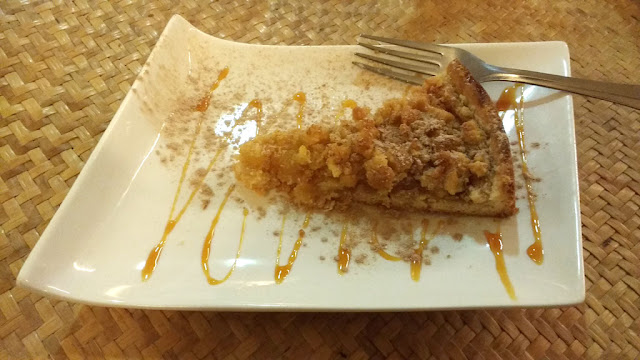 So, back to the apple tart. It consisted mainly of a dry crust and a layer of crumbles, in between there was a thin layer of what I would describe as apple sauce. By that I mean: no apple slices or pieces, just mashed apples. And not enough of them, to my taste. My overall impression was that this tart had spent some time drying out before reaching my plate.