At first sight, this apple tart looked really good. I had chosen it for dessert after a rather light dinner, so I was really looking forward to enjoying a nice piece of tart.

And indeed, there are many positive things I can say about it. The filling consisted of real apple slices and appeared to have a thin layer of apple sauce at the bottom. The crumble topping was really good. (You may realize by now that I prefer crumble topping over a double-crusted pie.) 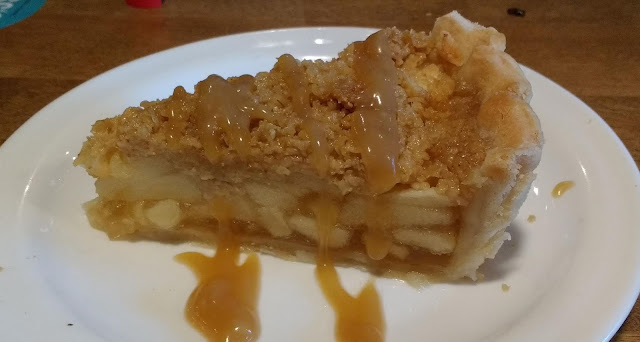 Also, the tart was served warm, which always enhances the flavour.

Unfortunately, I found the crust rather disappointing. It was neither flaky nor crusty, but soft and rather dry.

The tart itself was not very sweet and contained no discernible cinnamon, but that was compensated by a generous and very tasty caramel drizzle. So the overall impression was still very satisfying.