After a lunch with friends elsewhere I ended up in a Swiss Chalet for dessert. Since a slice of apple pie was staring at me from one of those table top dessert menu holders, I knew I had to try this restaurant chain's version of my favourite dessert.

The pie came warmed up (at my request) and the first thing I noticed, is that it was a really nice big piece. Other than that, there is not really anything very good to say about this pie, but neither can I find anything really bad to say about it. 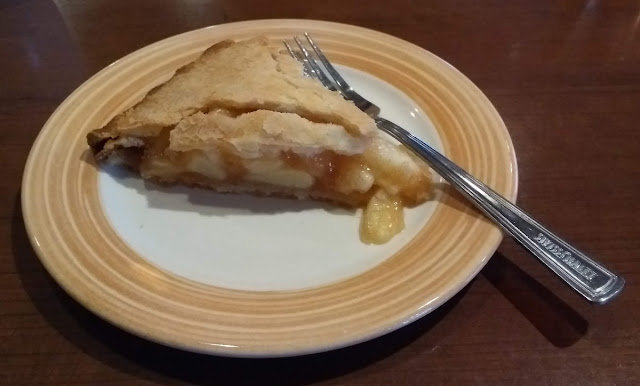 The crust was okay, a bit dry, especially at the edge but that is a part I often avoid eating anyway. The filling looked and tasted mass-produced, heavy on the gelatin and the cinnamon, not quite as bad as canned pie filling but far from what a freshly baked apple pie tastes like.

Hence my verdict: this was neither a bad pie, nor was it a particularly good pie.  I believe I finally found the exact standard for an average three-star rating.
Location: 2150 Carling Ave, Ottawa, ON K2A 1H1, Canada