For someone who tirelessly searches for the best apple pies, tarts and other pastries so that you, the reader, may know which places to avoid and which are worth the trip, it's a great joy when an apple pie exceeds my expectations.

I've noted before that looks aren't everything.  For me, the final, and maybe the only, true measure of quality is the taste experience. I have been disappointed at times because a great looking apple tart turned out to be only mediocre once I bit into it.  Fortunately, the reverse also happens.

After a long walk in the morning through the Palmetum, Santa Cruz's magnificent botanical garden of palm trees, I found myself hungry again in the afternoon, in spite of the delicious (and surprisingly inexpensive) Spanish ham sandwich I had for lunch.

Back in the downtown, it took some time to find a restaurant that served apple pie. When I spotted it, the pie looked quite ordinary, but I decided to give it a try anyway. 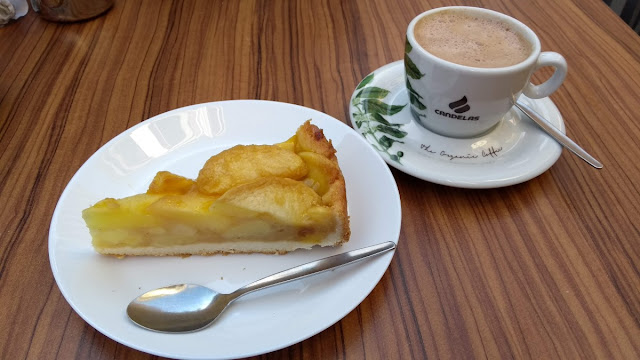 And I am sure glad I did. The apple slices in this pie were fresh and juicy, making me realize that there is more to be said about apples than whether they are cooked, canned, frozen or fresh. Even unprocessed apple can be dry, e.g. if it has baked too long. Not in this pie! The filling was juicy and refreshing, which was great given the summer-like temperatures.

The crust was a bit like shortbread, but nice and moist as well. I did not taste any cinnamon, but I didn't miss it.

All in all, a great piece of apple pie! 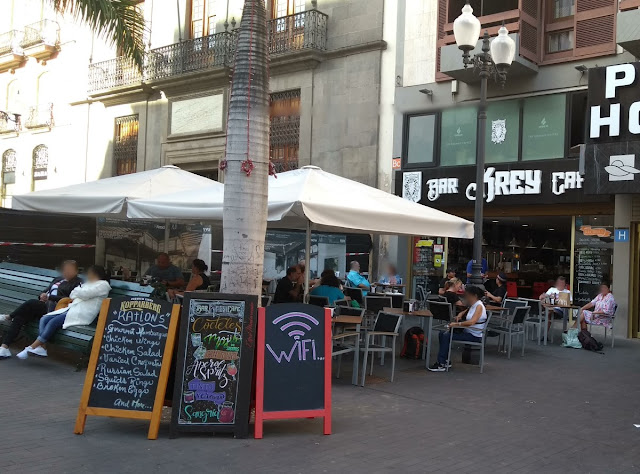